Where are the best Charleston homes to tour?  While perusing the streets of downtown and exploring the Holy City, make sure these Charleston historic house tours are on your must-do list.

Charleston’s rich architectural history dates back to the 17th century. The Old Exchange Building represents the early, Colonial style. The Georgian period is characterized by symmetrical facades with a centered front entrance and 5 windows facing frontward. The Heyward Washington House is a great example. Beginning in the late 1700s this style gained in popularity and may be seen in many residences. Read More

The Federalist period followed the Revolutionary war. Home designs incorporated lavish elements such as balconies, shutters, and palladium windows. The Rhett-Aiken House is a noted example of the Federalist architectural period.

As Charlestonians gained wealth they embraced the NeoClassical architectural style and constructed homes of considerable grandeur. This design period gained popularity in the years leading up to the Civil War. Neoclassical architecture is characterized by columns, smooth walls, and arched windows. The Charleston County Courthouse at the “Four Corners of Law” offers a good example of the Neoclassical architectural style in Charleston, South Carolina.
Gothic Revival, Italianate, Victorian, and Art Deco periods followed. Few cities in the United States are as diversely represented in architectural styles as Charleston, SC. These multiple examples of design are a significant contributor to the rich historical tapestry of the city’s character and charm. Step back in time, and plan a day to enjoy Charleston historic house tours. See our list of locally recommended Charleston Historic Home Tours below!

Begin your tour at the infamous Heyward-Washington House. This Georgian-style double home offers the only glimpse at a kitchen building of this period. The home was constructed in 1772. This historically significant dwelling was the home of Thomas Heyward, Jr., one of the four South Carolina signers of the Declaration of Independence. 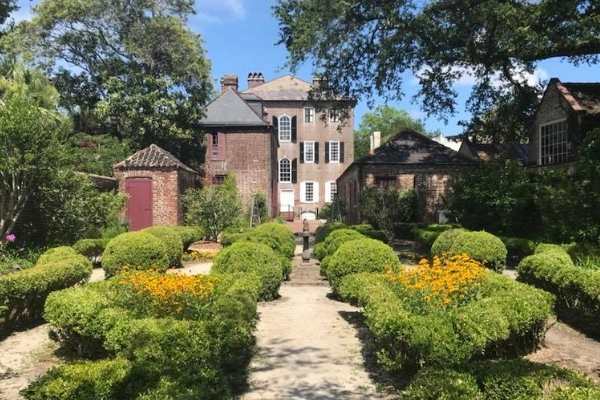 George Washington was a guest here during a visit to Charleston in 1791. This home served as the first home in the city to become a museum. The Heyward-Washington garden is a hidden gem behind the enclosed, brick walls.

Meticulously maintained, the garden is an excellent representation of 18th gardening in Charleston.

The Nathaniel Russell House, a national historic landmark in Charleston, SC is considered one of America’s most important dwellings. It incorporates elements of Georgian and Neoclassical design.

Wealthy Charleston merchant Nathaniel Russell built the home for his family in 1808. The three story cantilevered staircase is a stunning centerpiece in this exceptional residence on the High Battery in Charleston.

After your visit at the Nathaniel Russell House, you must also visit the Aiken-Rhett House. This complex offers an important, and educational perspective of life in the 1800s. 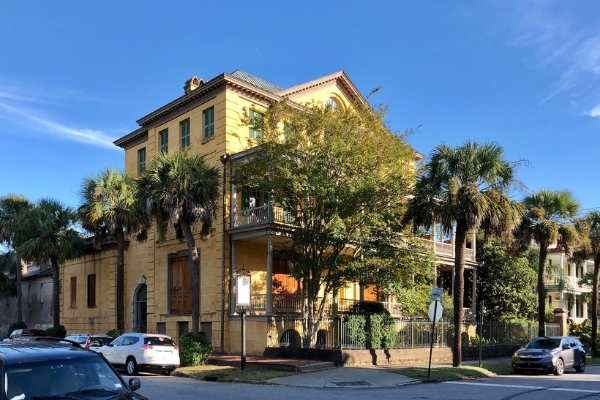 The back buildings, where slaves lived, offer visitors a unique opportunity to learn of the conditions and life endured by enslaved African peoples. This antebellum home was once owned by the powerful and wealthy Governor William Aiken.

Today, the Aiken-Rhett House is one of the best-preserved townhouse complexes in the United States. The Edmondston-Alston House has survived hurricanes, the earthquake of 1888 and the Civil War.

Add this one for a perfect waterside museum tour. Many period pieces of furniture, artwork, and silver are original to the owners of this historic residence.

No list of Charleston house tours is complete without Magnolia Plantation and Gardens. Recently, Travel + Leisure named Magnolia one of America’s most beautiful gardens. The plantation was founded in 1676 by the Drayton family and is the oldest public garden in America.

Not only can you tour the gardens, but you can also tour the Plantation House where the Drayton family once lived.

The Manigaults became one of South Carolina’s leading families, working as rice planters and merchants in the 18th Century after fleeing religious persecution in Europe in the 1600’s. This brick antebellum residence was designed by the Scottish, Neoclassical architect Robert Adam.

The exterior features a two story porch, elaborate windows and exterior doors. Inside, the interior is crafted in rich woodwork details as seen in the fireplace mantels, cornices, and doors. You’ll find period pieces and furniture from France, Europe and America as well as original color schemes throughout the rooms.

The Joseph Manigault House, also referred to as Charleston’s Huguenot House was threatened with demolition, but a group of caring Charlestonians organized to save the home. It was purchased by the Charleston Museum in 1933 for purposes of preservation.

This was the birth of the Preservation Society of Charleston.

Calhoun Mansion is one of Charleston’s most unique house tours. As you wander the halls and rooms of this 19th-century home, you will discover historic art collections, antiques, furniture, and more. Not only is the mansion stunning, but the relics inside of it give visitors a glimpse into the lives of the people of Old Charleston.

If you are looking for fun ways to explore the Charleston peninsula, read our blog on the city’s best walking tours!  If your dreams include owning a piece of Charleston history, contact Pam Harrington Exclusives for a current list of historic Charleston homes for sale.

Owning a historic home in Charleston offers a unique opportunity to be a part of America’s history. You are helping to continue and preserve the historical charm of Charleston.

Pam Harrington Exclusives is a leader in Charleston real estate, serving historic Charleston and the islands for over 43 years. When it comes to buying a historic home in Charleston, it is vital to work with a realtor who understands the nuances of historic home ownership from the Charleston BAR building restrictions, to historic tax credits, and other specialty considerations.

When you are ready to become a part of our history, we are here to assist you.